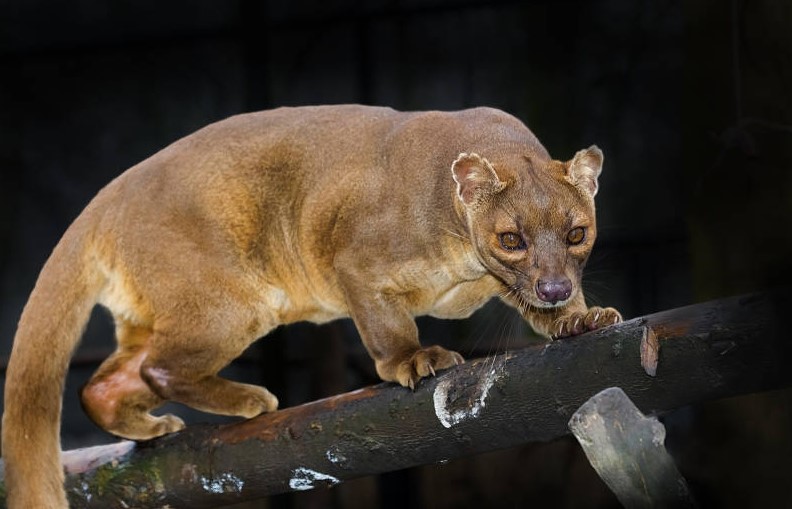 Hearing Fossa animals will definitely make you interested in knowing the facts about Fossa. This animal is an endemic animal in Madagascar. The island of Madagascar is a large island located east of the African continent.

Because they are separate, many animals that live in Madagascar are different from animals in Africa. There are many endemic animals that can only be found in Madagascar, one of which is a unique animal named fossa.

Having the scientific name Cryptoprocta ferox, Fossa is the largest carnivorous mammal as well as the top predator on the island of Madagascar. But that’s not only their uniqueness.

Facts about Fossa: Family Of Mongoose and can Prey on All Kinds of Animals

At first glance, it is rather difficult to determine actually what kind of animal this fossa is. Their appearance is similar to a combination of dogs and cats, but it turns out that fossa belongs to the family Eupleridae which is still related to mongoose.

Although the status of the largest carnivore in Madagascar, the actual size of the fossa is not too large. Their body length is only about 75 cm plus a tail that is almost the same length. Their maximum weight is only around 9 kg. They have sharp teeth and claws that can be pulled in but not completely.

As top predators, fossa will hunt and eat various types of animals that they can catch. One of his favorite prey is lemurs, a type of Madagascar endemic primate. Lemurs live in trees, but that is not a barrier for the fossa to prey on them.

Other interesting facts about Fossa, they will be using their claws to climb and long tails to maintain balance, fossa can hunt tree-to-tree lemurs with great agility. In addition to lemurs, Animalia’s website mentions that fossa also hunts birds, amphibians, reptiles, and even insects. And unlike most predators, fossa can actively hunt during the day and night.

Communicate Through Scents and Mate in a Unique Way

Fossa is a loner animal. They live in their own territory, which can be as large as 4 square kilometers. Only during the breeding season will they be in contact with other fossa.

To mark its territory, the fossa emits an odor from the odor gland located under the base of its tail. Reporting from the San Diego Zoo, when meeting with other fossa, they will communicate through a roar or howl.

This one is probably one of the unique facts about Fossa. During the breeding season, dozens of fossa will gather somewhere, then a dominant female will climb a tree and attract male attention with the scent of pheromone. Then the male fossa will gather under a tree to fight over the right to mate the female. Mate in a Unique Way

And so on until all the fossa in the area has the opportunity to mate. Now you know that this endemic animal has a uniqueness that is different from other animals. Those are facts about Fossa, a predator that can prey on all kinds of animals in Madagascar.